September 15, 2017
Arirang Train or A-Train is one of the famous train in Gangwon, South Korea. The train opened on January 22, 2015, from Cheongnyangni Station in northeastern Seoul and passes trough several stations in Gangwon-do, including Mingdungsan and Jeongseon, which host the 'Five Days Market', and arriving at Auraji  Station. 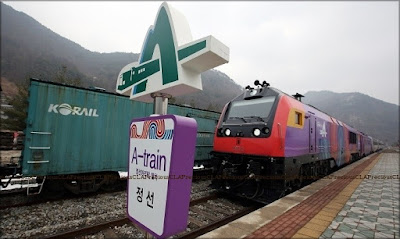 The 'A' in the train's name comes from Arirang (a Korean folk singer), and the words 'amazement' and 'adventure'. As you know the song has many variations, and the Jeongseon Arirang ia a regional one. The song is listed as an Intangible regarded as an unofficial anthem of Korea. 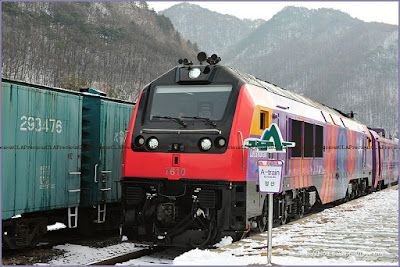 The train has four themed cars with large windows and glass walls, one is sky room, on a tea room, and two of the cards are decorated in regional colors of red, yellow, blue and purple representing Jeongseon's geographical features such as the Dong River and the mountain ridges.

The train's exterior includes a purple color for the pulsatilla, Jeongson's official flower, and is decorated with curves that symbolize the Arirang melody. Activities on the train include storytelling, music, magic shows and quiz games.

The new line to Jeongseon is the first train to be named after a Korea town, and generated additional local interest due to the proximity of the schedule 2018 Winter Olympics. So, if your are happen to be in Jeongseon in 2018, don't forget to try A-Train !

The train is so colorful! If I visit there, hope to try it too one day =)

I want to try this. Look like need to re visit Korea soon.

I think they are getting ready beautifully for the 2018 Olympics - it will so colouful during the winter too.

what a colourful and cute train! purple makes it look really nice

Thanks for highlighting one of the must-do while in Korea during the Winter Games. I remember the famous Arirang, didn't know they have a train named after her.

Such a pretty looking train.. would so love to check it out someday, but dont think I can make it to the Pyeong Chang Olympics...

Wow such a pretty train!
At first I wonder if this is the train in the movie Train to Busan :)
I'll take note of this train.

haha. cute colorful train but goo bad can't be there for the olympics.

this train looks so cute and colorful. i definitely will include this place in my itenary. thank you for your recommendation.